I was not happy at all when the alarm went off at six this morning.  I was exhausted and felt like crap, but there is a ton to do today so I dragged my butt out of bed and left my snuggly Boston Terrier behind and got into the shower and tried to wake up.

I logged into work and did a little work for the office while also working on wrapping up the DRBD project that I was working on late last night.  That went pretty smoothly and I was able to get into the office physically by just after seven thirty. 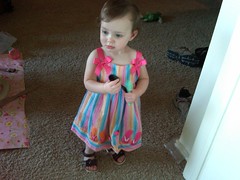 Dominica had a really rough morning with Oreo.  After he had two accidents last night he had another one sometime this morning.  Now she has a laundry disaster on her hands.  I walked him before I left the house this morning but apparently that did not really help.  So I had to go get twenty dollars worth of quarters so that she could start doing laundry first thing this morning.

This morning was insanely busy so at lunch Dan and I decided to escape to La Cima.  I ran home at eleven thirty to bring Dominica her quarters.  Oreo was banished to the outside balcony.  The balcony is tiny so he was laying on his little pillow hoping that someone would let him in at some point.  I think that he kind of liked the fresh air and lack of toddler chasing him around, though.  It was a nice day and it is shaded there.  If it had more room I think that he would really like it.

Dan picked me up at noon and we ran over to La Cima.  Lunch was awesome, as always.  Dan got the special guest treatment.  We are hoping that he joins the club this week.

After lunch Dan dropped me at home and I walked Oreo then walked back to the office.  The afternoon was crazy busy again.  What a week it has been.

I got stuck kind of late and did not manage to get home until after six.  Dominica and Liesl had been out shopping so they swung in to the office to pick me up on their way home.  A quarter after six does not sound all that bad but when you consider that I started around a quarter to seven this morning, it is pretty late.

We went home and got ready as quickly as we could.  It was just about seven by the time that we were dressed and able to get out the door to go back to La Cima for dinner.

We met up with Brian in the lounge but skipped drinks and went straight to dinner as Liesl was already pretty tired by the time that we arrived at the club.  We knew that our time was limited and we didn’t want to waste our valuable “happy toddler” time having drinks in the lounge.

It is pasta night and tonight’s special pasta sauce was poblano cream.  It was delicious.  Liesl was pretty restless, though, so we were fighting with her most of the evening and had to spend a lot of time walking her around empty rooms to keep her occupied.  It is too bad that she cannot fall asleep easily anymore while we are out now that she is older or she probably would have just got to sleep and been quite happy.

We headed out around nine.  We went right home and Liesl was asleep before we even got there even though it is just a few blocks away.  I was pretty tired too and was in bed myself by eleven.  I have not been getting enough sleep this week at all.

I have to be in the office early again tomorrow.  I am leaving slightly early to go to happy hour at La Cima before heading home.