Tuesday, and a second power outage this morning.  We actually knew about it last night, so we were much better prepared for the start of day, today.  But it was still a very long day trying to deal with all of that.  It has been a crazy week, and we are only two days into it!

After work this evening, Paul dropped me at the Trinity Mills Train Station and I took the last train of the day, the 8:10PM A-Train north to Denton downtown.  This is my first time every taking the A-Train or going north by train at all.  The ticket price is outrageous, $12 for a one way ride, but the train is clean, comfy and ridiculously easy.  And it is pretty fast.  If it was a smart price, I would want to do this all of the time.  It goes from and to the perfect locations, it would be hard to be handier.  But it does not run late at all, not even quite late enough for comfortably going out, let alone returning from going out.  So the schedule definitely needs some work.  You can’t even use it for going out to dinner.  I’m not sure who this train is for, but not for people going to Denton, that’s for sure, and that seems like a pretty foolish financial decision for Denton to make.  Denton is like Dallas’ little piece of Austin and should be a huge draw, but there is no good way to get there.

I arrived at a quarter till nine and walked west on Hickory through a charming restaurant and bar district.  I had loads of time to kill so stopped at Rusted Taco and tried their fried rockfish and grilled mahi mahi tacos.  It is Taco Tuesday, after all.  The tacos were pretty good, I ate them while I walked to the square.

Since I was so early for industrial night at the Abby Underground, this is the last one ever, I took a long walk around the Denton Square to check out what was there.  There are a lot of venues and restaurants and stuff that look really nice.  I want to spend more time in Denton exploring what there is here.

I sat on the square for a bit cooling down, it was a really hot night, and finally went to the Abby at a quarter after nine, which was still ridiculously early.  Rachel isn’t even supposed to get out of work until ten thirty at the earliest.  The bar lights were all on and I was the first person there.  Just Jaiden setting up, his co-DJ and the bartender.  So I just had a beer and chilled for a while. 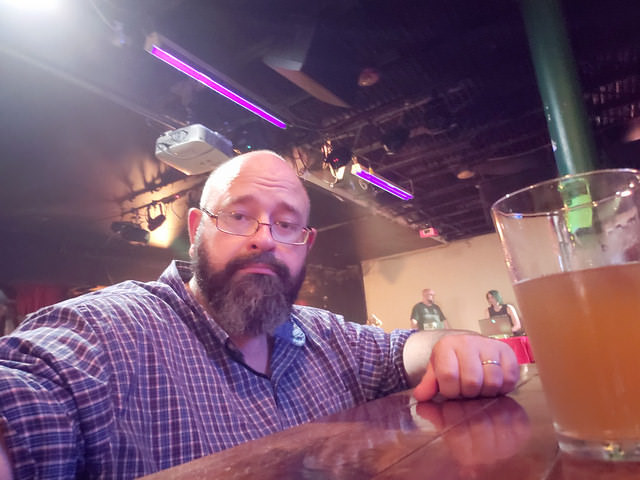 The party got going around ten thirty or so.  L was there tonight, so we hung out some.  Rachel arrived around twelve fifteen.  We danced till the bar closed. This was Jaiden’s last night DJing at Abby Underground.  My understanding is that the party picks up at Andy’s across the square sometime soon.

We decided not to stay for the after party.  It’s always so late and we were not sure where it was going to be.  I was pretty happy when Rachel decided that she wasn’t in the mood to stay out that late.  She was hoping for an 80s movie back home.  So I drove her back to the house, and we watched The Lost Boys which is one of her, Dominica, and Paul’s favourite movies, but  I have never seen it.  While a classic 80s film, it’s actually pretty horrible and if you didn’t know that the stars of the movie ended up being famous actors, you would definitely think that it was some unknown B movie.