I was up at eight.  The sun is out.  I did some writing, made myself a bagel for breakfast, made the coffee, did some cleaning in the kitchen, did some DuoLingo.  I got the day kicked off pretty well.

The girls were up mid-morning.  They both wanted fresh bagels for breakfast.  Good thing that we bought a dozen yesterday.

I am on two months of no caffeine now and it has been going great.  No cravings and I have a better sleep schedule and I just never get tired during the day.

While Liesl ate her breakfast, which was actually in the afternoon, I read some more of The Witch of Blackbird Pond to her.  We are on the fourth chapter now and I am rapidly catching up with where she is in reading it herself.  Doing the reading twice, and having me explain things as we go, seems to be working well.  My goal is to be reading it right behind her as reinforcement once I can fully catch up.

I looked up the author, today, Elizabeth George Speare.  She was an important author, especially in my day.  She was born in 1908 and it turns out that she passed away in 1994, just months after I graduated from school.  The book we are reading now was written in 1954, and is probably her most famous.  But nearly equally famous, and also one that I read as a child, was The Sign of the Beaver (a copy of this is at dad’s house somewhere) which was written in 1983, so was a very new book when I had read it being only a year or two old – I had no idea at the time that one was so old, and one so current.  Oddly, I have never heard of her other Newbery Medal winning book, The Bronze Bow, which was written in 1961.  It’s still in print, but not even remotely as famous as her other two.

Luciana spend the morning in my room, in the bed watching videos.

The girls tried out some snacks that they had found at the grocery store yesterday. 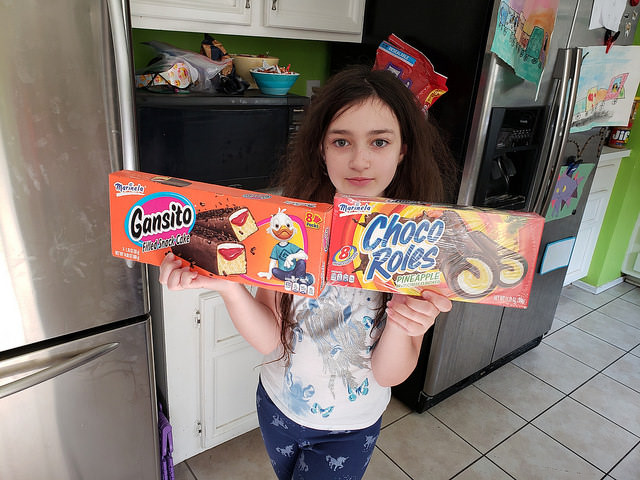 While we were reading, Helen came over from next door and asked if Christian could mow our lawn, he was already out mowing and wanted to use up the gas that he had, and she said that he liked mowing, that it helped him to relax.  I’m skeptical that they just didn’t think our lawn looked awful, but said that he could.  So the lawn is all nicely mowed now for Dominica’s return.  I had intended to go out and mow some today anyway.

Christian also trimmed the bushes in front some, and we talked and he has a machine that can take them out.  So he said that he’s going to come over on Wednesday and remove them.  While we were looking at them, we noticed a huge crack in the side of his house.  Luckily he is only renting, so the wall damage is not really his concern.  But he said that when it rains hard, the wall gets wet and water runs across the floor from the hole in the side of the house!  He said that the roof is damaged and water comes in from that way, too.  He had to move his television because of water raining down on it.

I invited them over to drinks or something next weekend, and to bring the kids so that they can meet our kids.  Liesl and Luciana came outside to talk to Helen, too.  Or to say hi, not to really talk.  And they invited the girls to go over and play on their trampoline sometime.

Liesl and I ended up reading seven chapters together today and I didn’t just catch up with her, but am a page or two ahead, now.  It has been so long, over three decades, since I read this book, but as I read it it is all so familiar.  Amazing to read it again, so long afterwards.  I can only guess that I was ten or eleven when I last read it.  It was one of the many wonderful books that I got from the Scholastic book catalogues that we had before the days of Amazon.

We would order from these small catalogues at school.  They were just a couple of pages long, and we would be send home with them.  You would fill out an order form and in a month or whatever, some books would arrive.  I got loads and loads of great books this way, like Moccasin Trail, The Sign of the Beaver, Johnny Tremain, To Kill a Mockingbird, Danger on Panther Peak, All Quiet on the Western Front, A Wrinkle in Time, Mrs. Frisby and the Rats of NIMH, Up a Road Slowly, Across Five Aprils, Watership Down, The Lottery Rose, No Promises in the Wind, The Summer of the Swans, Where the Red Fern Grows, The Secret Garden, Rabbit Hill, Little Women, Trapped in Death Cave, and many, many Garfield and Calvin and Hobbes comic books.

Luciana made some slime on her own today.  She went and found the ingredients, and even a container.  She did the mixing on her own in the kitchen and voila, she made her own slime.  It was way easier than the kit that we had for doing slime previously.  It seems that slime mania has taken over with kids today.  Everyone does it.  From their friend Emily in Missouri, to Isabella to the kids directly next door.  It’s all the rage.

It took a lot of work, for some reason, to get the kids out of the door today to go to the playground.  I wanted to be on the way at five, but it was after six when we ran out the door.  We got lucky, though, their new friend, whose name we do not know, was there and they played for a long time.

They played for a while.  He brought then a yoghurt to share.  And introduced them both to lychee fruit, which they both liked.  I tried it, too, it is delicious. 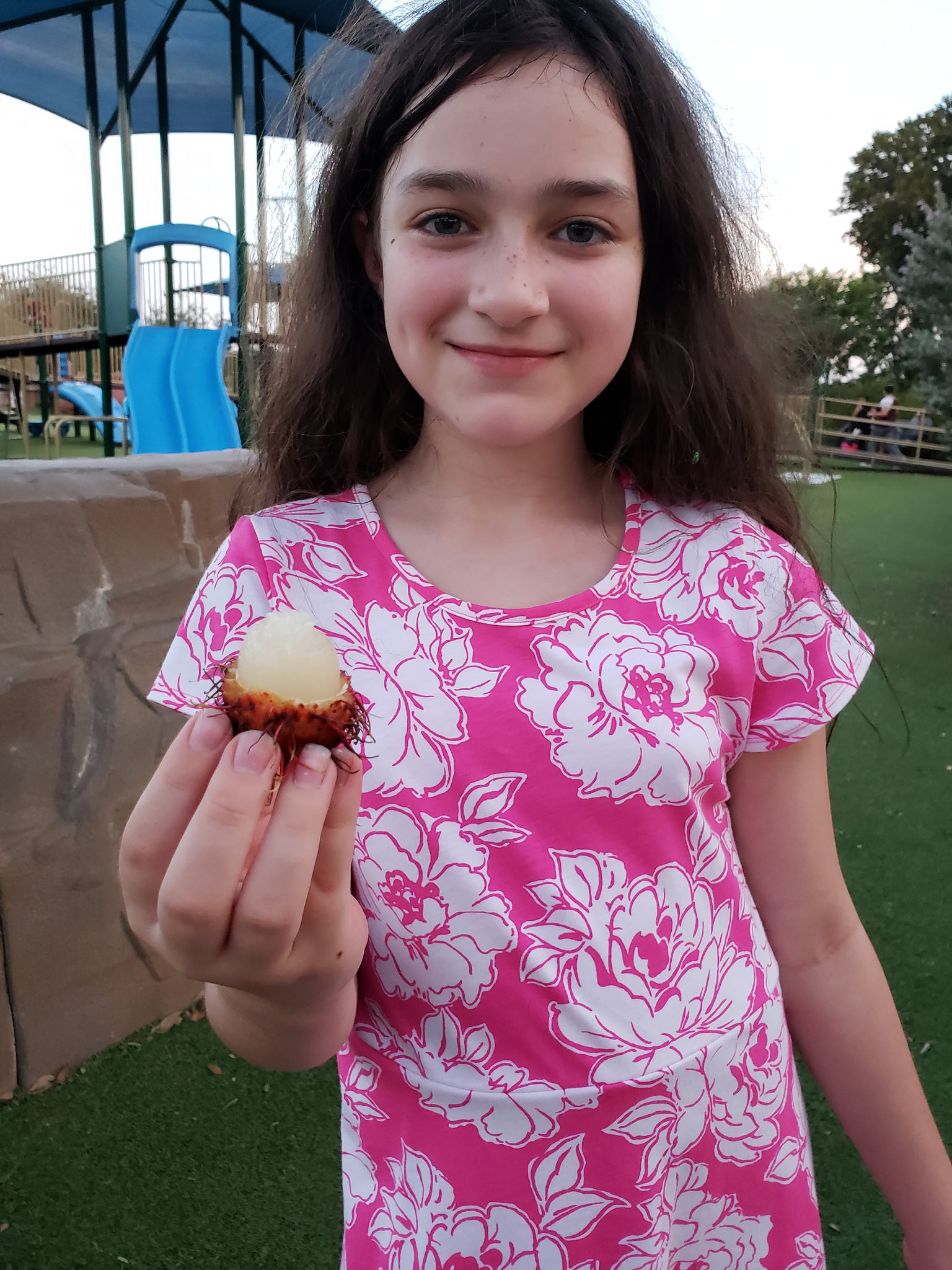 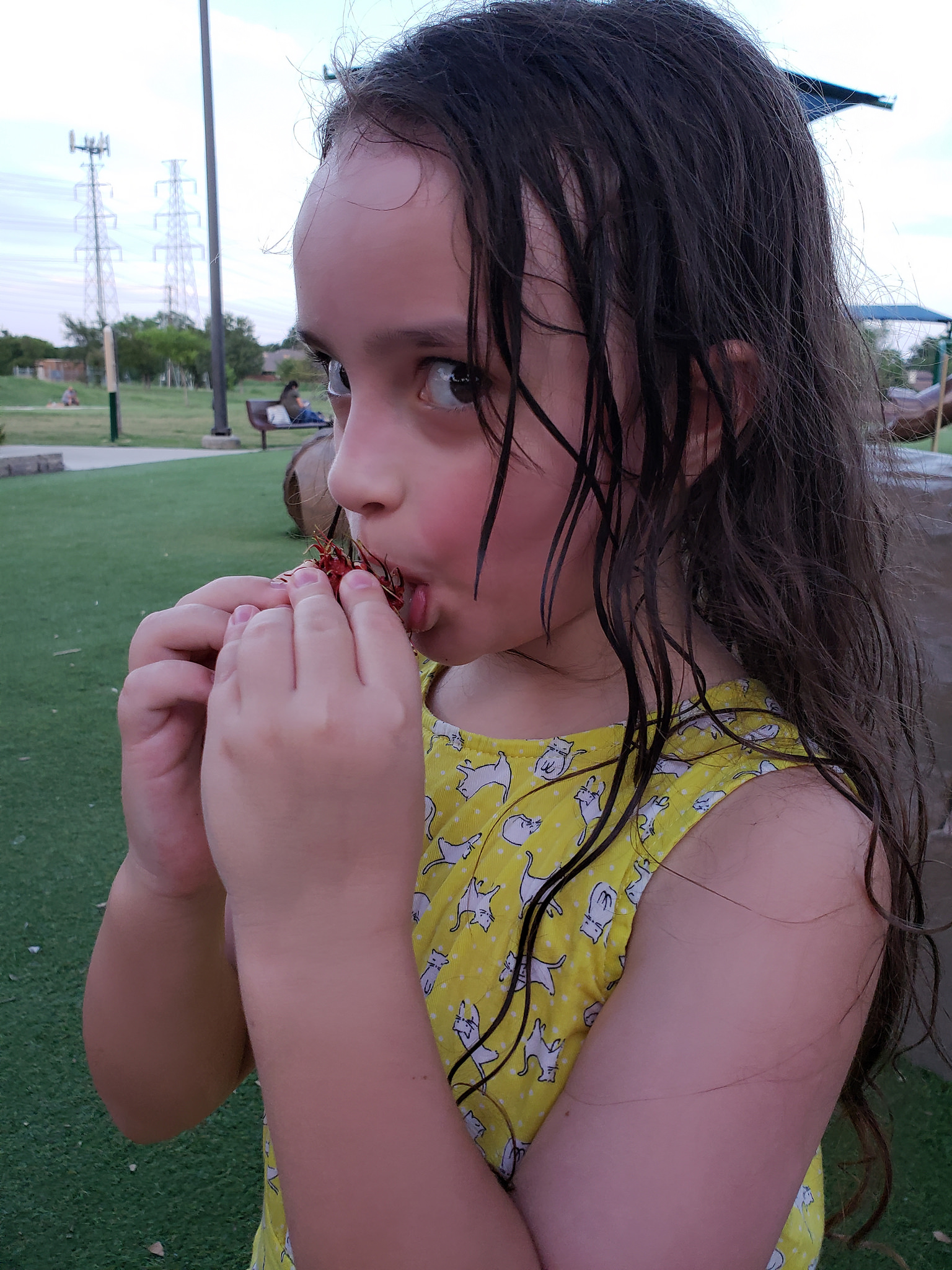 They had a good time and played for about two hours.  Dominica got home while we were there after stopped at Taco Bueno around the corner.  The girls did not want Taco Bueno, Liesl wanted Taco Bell and Luciana wanted my home made pasta.

We left the playground before eight, swung into Taco Bell getting Liesl and I dinner, then came home to visit.

The girls each got a stuffed wolf from Colorado.  They love them.

Spent most of the evening catching up.  Then read the third chapter of Harry Potter and the Chamber of Secrets before getting the girls off to bed.

Dominica was pretty impressed by how clean I was able to get the house.  Of course the first thing that she did when she got home was to close all of the windows.  Ciana was sad, the girls love that they get all that natural light when it is just us.