Sunday.  Today is our day to attend the Dallas Symphony Orchestra.  It’s early in the afternoon so we have to prepare for it all morning.  Liesl has been mulling over whether or not she wants to go or not.  It took her all morning to decide, but she eventually decided, at the last minute, that she wanted to do the symphony with Dominica and me.  I had to show Liesl a YouTube video of the DSO playing Mahler for a while for her to make up her mind.

I worked most of the morning, know that we were going to be out much of the day.  I got a lot done, especially on a Laravel and PHP project that I’ve been working on when time allows.

We had to start getting ready at eleven to be able to get to the symphony.  Liesl was super excited that she had to get all dressed up and borrow Dominica’s jewelry to go.  That is really what pushed her over the top to decide that she wanted to go. 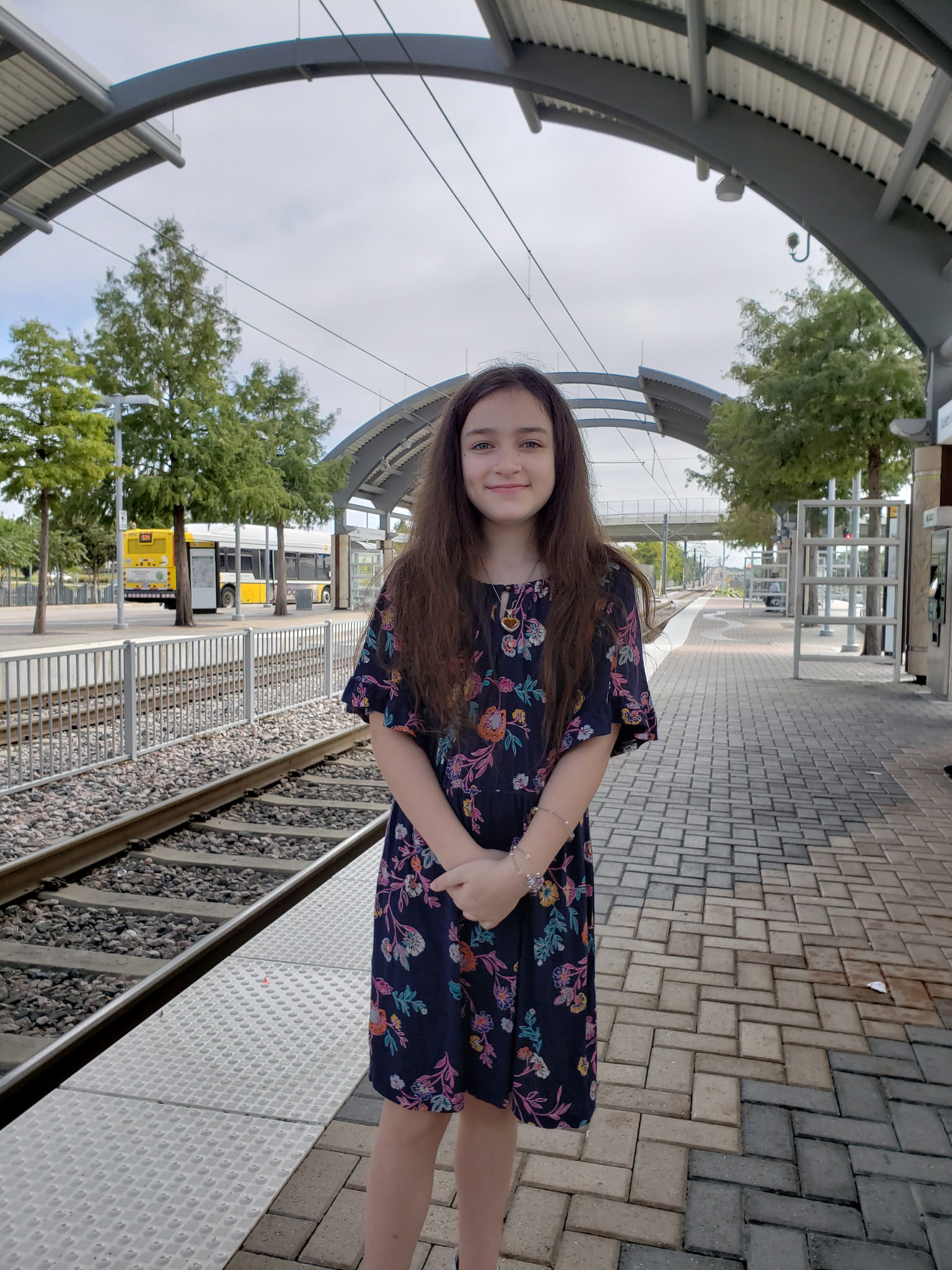 We left the house at a quarter till one and drove down to the Trinity Mills Station to catch the 1310 Green Line going downtown.  The weather is really nice today, warm enough to be comfortable, but not so warm that you get too hot.  Lots of cloud cover today.  Rain expected later on in the day.  Tomorrow is supposed to be really cold, only around forty two degrees! 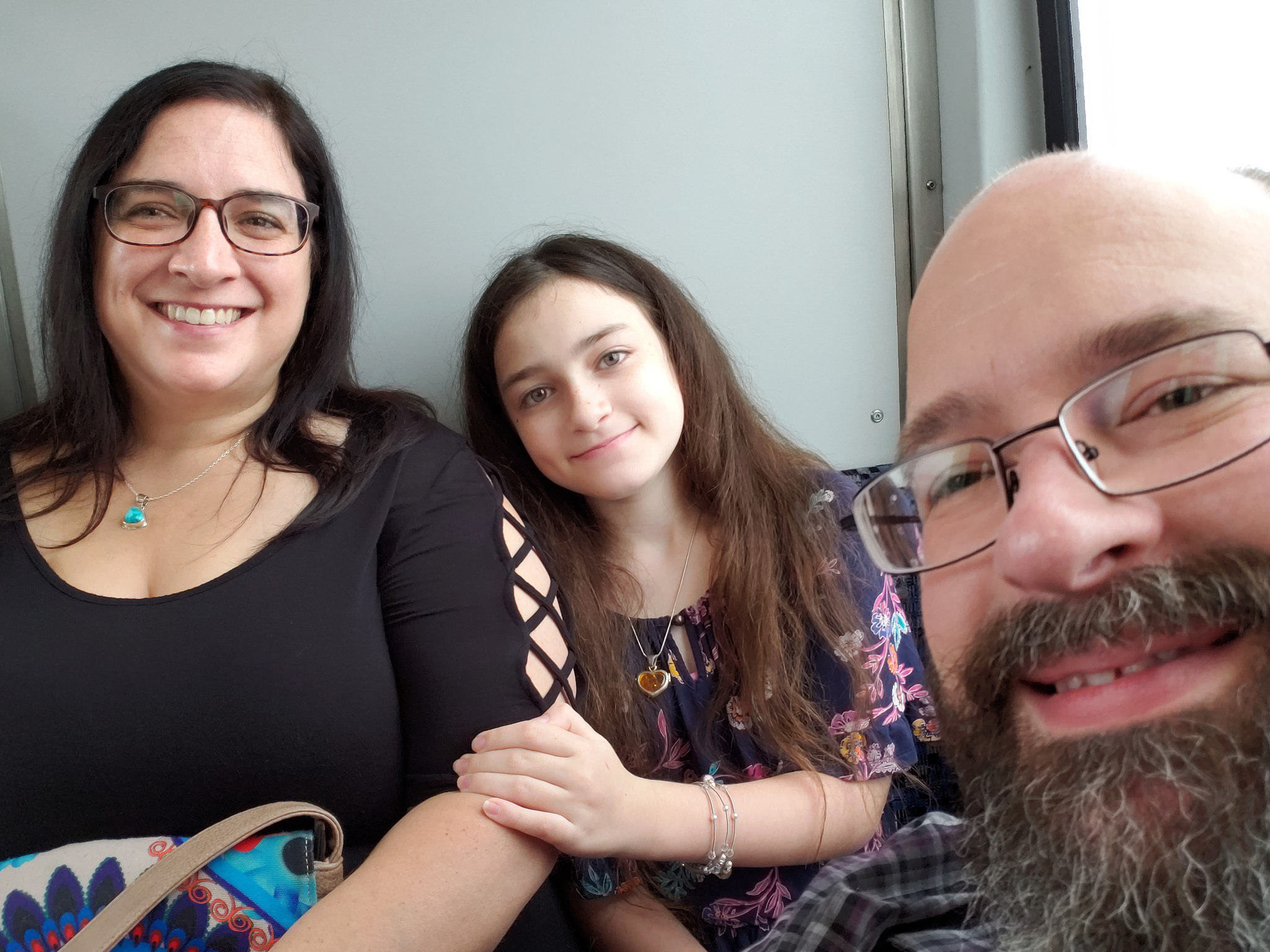 Dominica, Liesl, and I Riding the Green Line to Downtown

We easily caught our train headed downtown.  Liesl enjoyed the ride.  It has been a really long time since she took the DART Rail and she had a very fun time seeing the city whizzing by.  It is also the first time that she can remember ever going downtown for something, other than just driving straight through it.  It is a big day for Liesl. 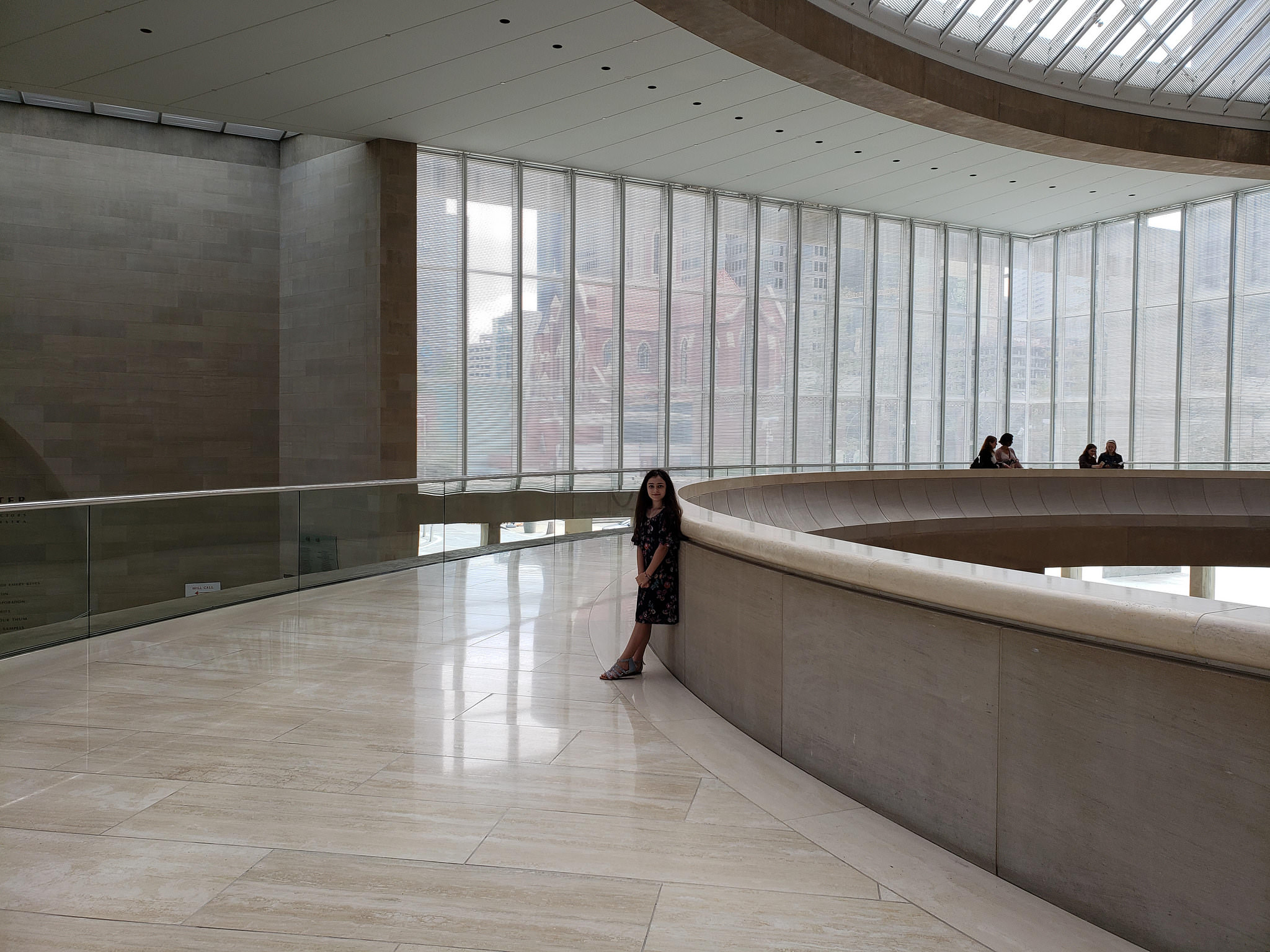 Liesl waiting at the DSO Symphony Hall before the concert.

Luciana decided that the symphony was like the musical version of a movie.  And just as she would not want to go to a movie theatre to see a movie that she could watch at home; she does not want to go to a concert to see a band or orchestra that she could listen to at home.  She prefers having her own bathroom, not needing to travel, not needing to leave the house, being allowed to pause and make noise, etc.  Pretty wise.  That’s why I don’t got to movies, too.

We made good time and had a nice walk from Pearl Station to the Symphony Hall.  It is about three blocks and Liesl was just skipping through the city, she was so excited to be out in Dallas. 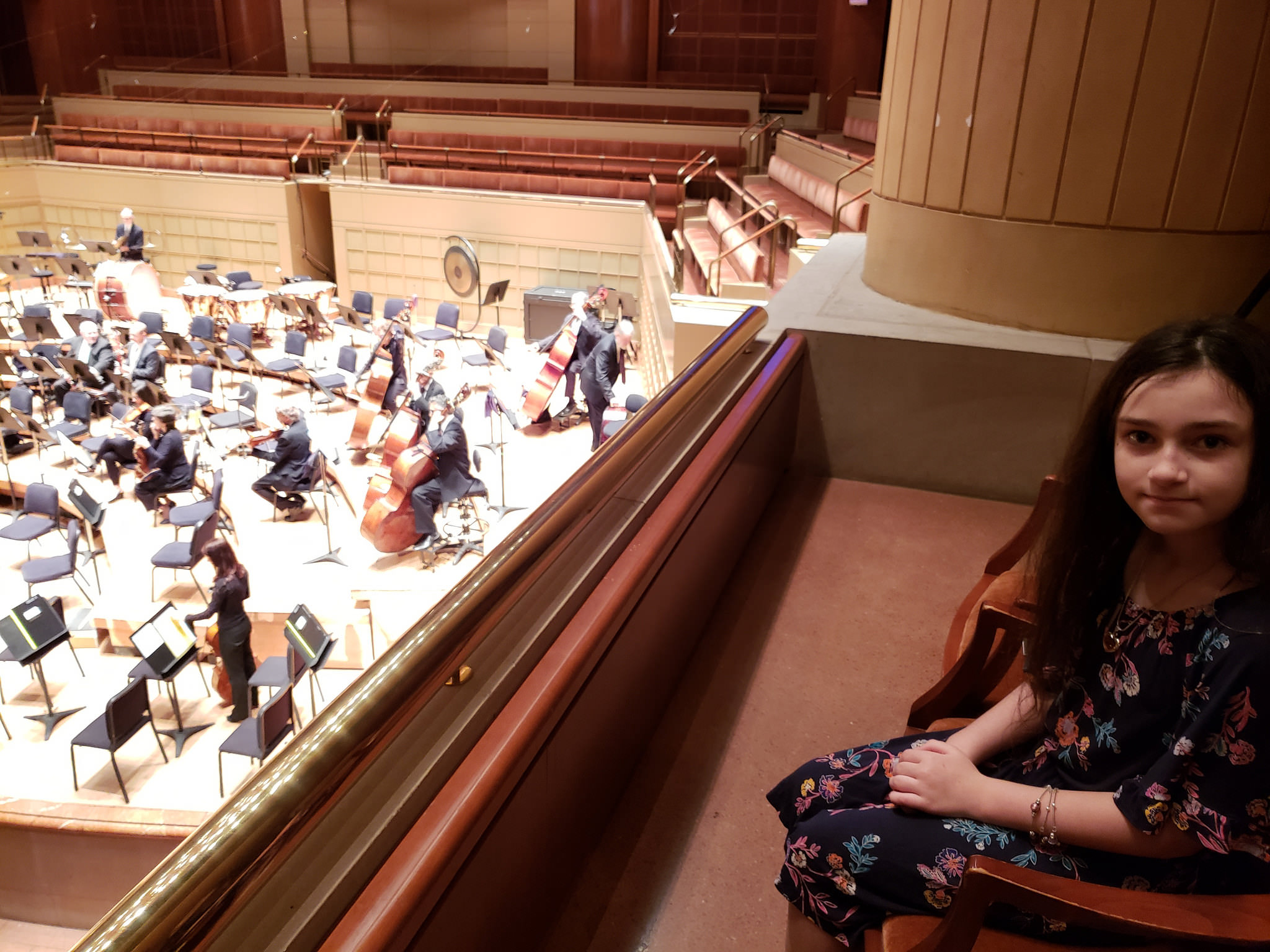 Liesl in our symphony seats.

Our tickets were waiting for us at Will Call.  And it turned out that we got private box seats in the very front box!  We were in V4 – V7, the front right Chorus Level box.  So cool. 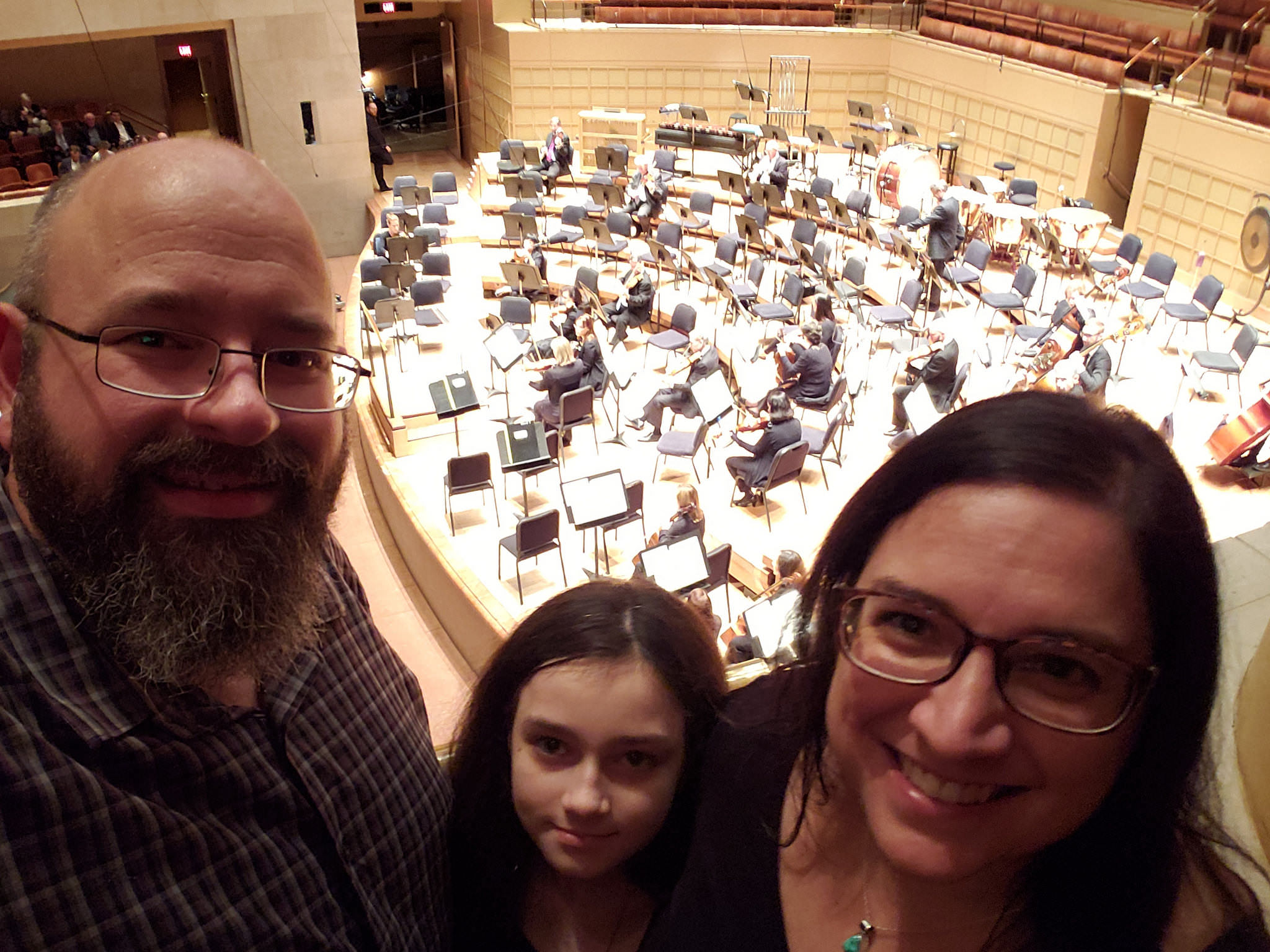 View from our box at the DSO.

The concert started at two thirty.  Liesl thought that the whole experience was very cool.

The first piece was not so interesting.  But the second, Beethoven’s Piano Concerto No. 3 was excellent, really moving.  We all really enjoyed it. 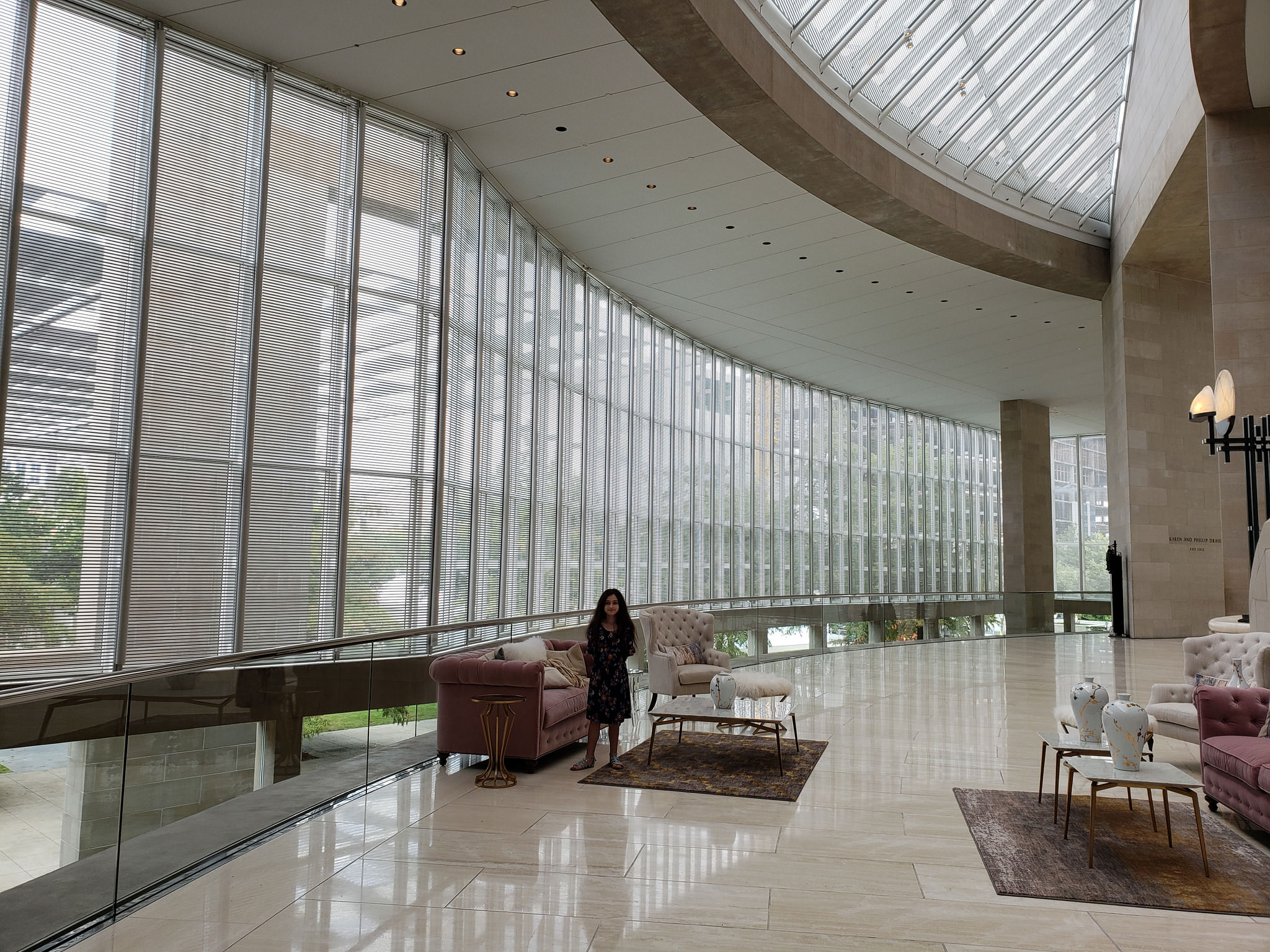 Liesl was struggling with how long the concert was by intermission so, after a bathroom break, we discussed it and decided that we should come back home rather than pushing Liesl to sit quietly for another hour.  We didn’t want to burn her out on the symphony and make her not want to come again in the future.  This was a good introduction to it and she liked it.  But she doesn’t plan on coming with us again for a while. 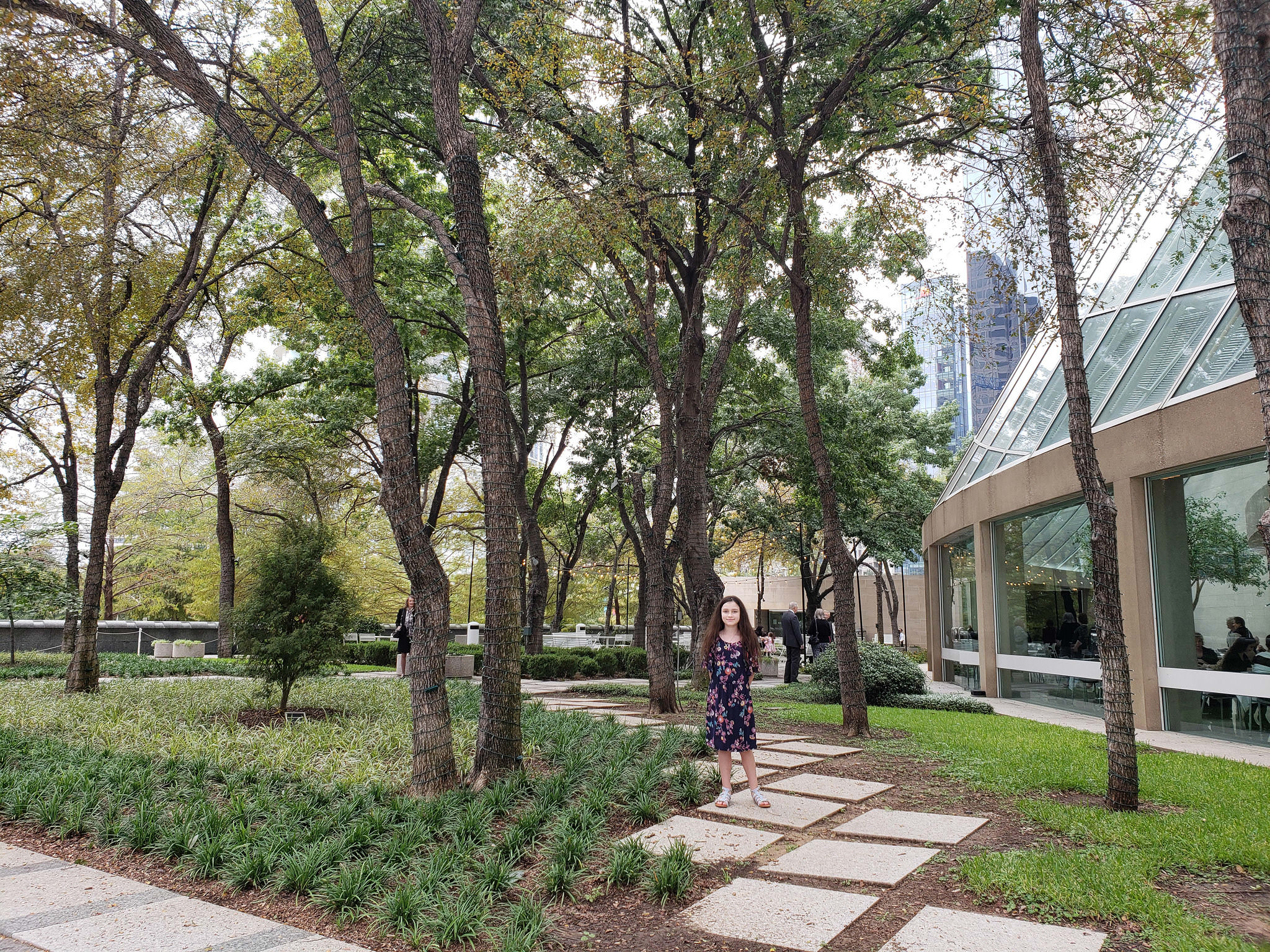 Liesl outside of Symphony Hall.

Dominica, Rachel, and I are planning on going to see Carmen at the Dallas Opera in November, as our next event of this type.

We walked back to the train, took a few pictures as it was such a perfect day and Liesl was so adorable all dressed up.  Then it was the train back to Trinity Mills. 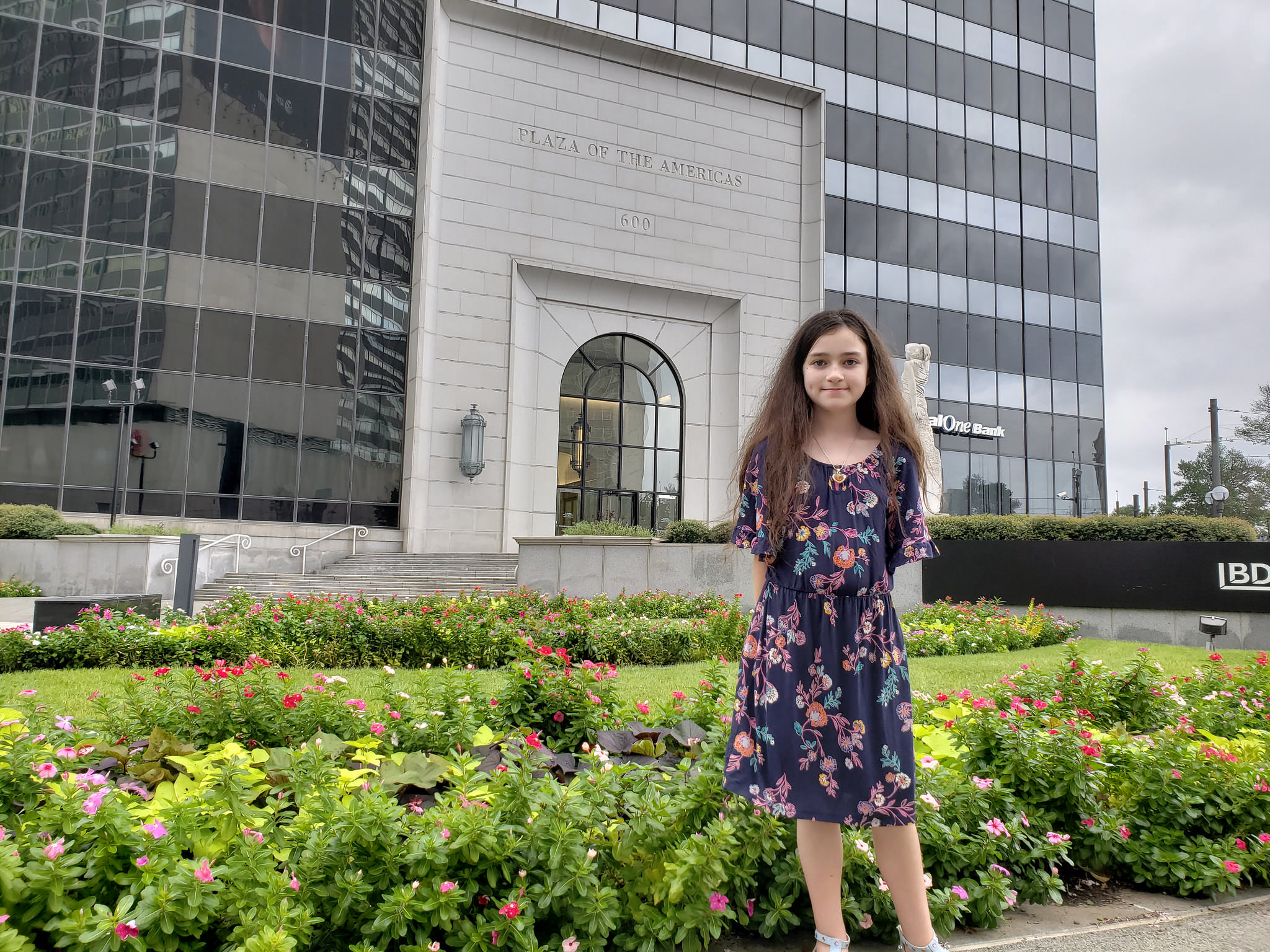 Liesl at the Plaza of the Americas

We had been in such a hurry this morning that none of us really got anything to eat other than some granola bars in the car on the way to the train station.  Liesl really wanted Taco Bell, big surprise.  We swung by Marsh and grabbed dinner for everyone on the way back.  Nice and easy day.

Liesl and I watched several episodes of the third season of Growing Pains while we ate our dinner.  She is loving that show and it is our thing to watch together now.  Luciana hung out in her room playing Roblox with her cousins.

Dominica and Paul have been watching Designated Survivor which looks good from time to time when I see it, but not good enough to make me decide to watch it.

After a lot of Growing Pains, Liesl played Mass Effect: Andromeda and I hung out with her as much as possible as she really prefers video gaming when we are together.  She does an amazing job of playing these really advanced, adult games all on her own.  I almost never help her and in reality, she is far better at helping me.  She has played a lot of the action sequences and path finding of my own game, so really her playing it controlling the story isn’t any harder, but way more interesting.

Dominica and Paul went out to the Fox and Hound tonight to shoot some pool for a while.

The girls and I started reading The Magician’s Nephew today.  They are excited about it and while it is only one chapter, are already really getting into the story.

It is really chilly out this evening.  The day stayed pretty warm, but tonight it is nice and cold.  Had to close all of the windows except for our bedroom window so that the house didn’t get too cold.

I had to work some tonight.  Some tickets came in and customers needed me.  So my evening was pretty busy.  Lots of writing needing my attention, as well.

I am on a 38 day streak on DuoLingo.  Not all that impressive for me.  Liesl, though, is on a 21 day streak now, three full weeks, and is really dedicated to learning her Spanish!  I am so proud of her.  Luciana did her DuoLingo tonight, too, without anyone reminding her.

I read another two chapters of Tom Sawyer to the girls tonight.  They are enjoying it, but boy is it a struggle for them to follow the story.  Even I am struggling a bit, the language is so obtuse.

I came back to the office to work this evening, but barely got started before I had to go take care of the girls and the house as a thunderstorm started that was incredibly intense.  At first it was far away, as storms are, but it came right over the house and go so loud that I knew that they would be crying, and sure enough they were terrified by the time that I got to them.

Thank goodness I ran to them when I did, because I had just started to try to comfort them and was explaining how to count out the time to determine how far away the lightning was when one of the brightest lightning strikes I have ever seen happened right outside of the window and the thunder was so fast and intense that it was deafening and I could still see the lightning while hearing the thunder!  The girls were crying terribly after that.  The thunder shook the house so strongly that Luciana’s light up sneakers actually lit up in the corner of the room as if she was wearing them!

I stayed up for at least an hour helping the girls to get to sleep.  So much for getting work done tonight.