It is Wednesday and that means that I am working out in Warren today. Today was my first attempt at going from Newark to Summit via the NJ Transit line that stops at the Newark Broad Street Station. I actually managed to get onto the wrong train this morning but they were nice enough to let me off right away so it didn’t turn into a disaster. Unfortunately the NJ Transit trains don’t notify you in any way what train they are and if they come at the wrong time then there is no way for you to tell without asking someone working there and often those people are not available as the train only stops for a minute and there are a lot of people getting on and off. 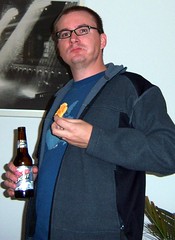 I got to Summit and got the company shuttle there which was very simple to do. This cuts half an hour or more off of the time that it takes me to get out to Warren on the days when I go out there. It is really too bad that I didn’t know how easy this was for the past eighteen months or I might have gotten rid of the car long ago. Going to Warren this way is a bit of a pain but great for once a week. Going to Manhattan is definitely the way to go though by train. I am really learning the advantages of not having a car though. In the past month I have not driven a single time and I don’t miss it at all. Never once have I wished that I even had the option of getting into my car. I don’t even think about it now. It is awesome.

The company shuttles are really nice, for the most part. People have made a big deal about how Google and Microsoft offer these types of shuttle services in the San Francisco and the Seattle (Redmond) areas but they are clearly not the only ones. Maybe their shuttle systems are a bit more intricate because they have larger populations in a single area but the shuttle system that we have here in the New York Metro is pretty decent when combined with the incumbent train system.

I was in Warren today for a “meeting” (sales pitch really) with HP and AMD. That was over lunch and they provided pizza which is really great because I don’t have a car when I am in Warren so getting pizza at these meetings is much nicer than going down to the cafeteria and it is enough to offset the extra cost of the NJ Transit train versus the normal PATH train. (How cheap am I to even realize that?)

The meeting was good and I managed to snag more of the awesome HP Bistro coffee mugs that they give out sometimes. I got one a few months ago and it is Min and my favourite mug and we always fight over it. Now I have two more so we can use them all of the time. This has to be one of the best marketing items ever. Simple, inexpensive (more or less) but very, very nice and useful. “Sure,” you say, “lots of companies give out coffee mugs.” And you are correct. They do. But these are very nice bistro coffee mugs that are much nicer than your average, run-of-the-mill coffee mugs. They are our favourite mugs to drink out of. Much nicer than what we are normally able to buy in the stores. And since we are both big fans of HP (we do own several HP desktops and several HP laptops and several HP servers) it makes it that much cooler to have around the apartment.

We also got two neat travel alarm clock slash thermometer slash USB hub units as gifts from AMD. Which also works out well as we are big AMD fans too. I like their products and I like them as a company and I really appreciate the fact that they do most of their fab work in Dresden and have done a tremendous amount to help rebuild that city. AMD is also considering putting another major fab facility into Upstate NY which would be great. I expect that it would be very near IBM’s fab facility in the middle Hudson Valley region. That is already a hotspot for high end chip research and development. (Kingston, a leader in non-CPU type chip manufacturing is headquartered there as well.)

I spent most of my afternoon in informal meetings as my time in Warren is normally spent catching up with people that I only get to see two or three times in a month. And next week is going to be crazy as I have another HP thing on Tuesday afternoon and then am flying to the UK on Friday evening! So not a lot of “work” was done today but a lot was accomplished. For whatever that is worth.

The shuttle home missed the evening train by about thirty seconds. 🙁 I ended up having to wait at the station for about thirty minutes. But it worked out. There was a nice guy who had interviewed with someone at my office today who was using the shuttle and train to get home and didn’t speak English comfortably and didn’t know the train system and he was stuck with me so I was able to get him to where he needed to go and otherwise he would have been on his own. So it was a blessing, I am sure.

Dominica made fish bites for dinner and had everything mostly ready when I got home so that we could eat right away. I was exhausted today and we had decided that tonight had to be a blow-off night because I was so tired. I had fallen asleep four or five times easily just on the shuttle ride from Warren to Summit! Can’t be stress – I feel great. Can’t be a lack of sleep – I have been catching up all week. No idea why. Must just be one of those days. Lack of caffeine, perhaps.

We watched two episodes of Buck Rogers in the Twenty Fifth Century and were off to bed early. I am hoping to do some serious sleep catching up tonight so that I can be useful again tomorrow.

Today was the fourteenth biggest drop in the Dow Jones Industrial in history. Not quite a disaster but definitely a huge hit. There were several factors that anyone following today will be acutely aware of – the dollar has become insanely weak and there is a panic that China is going to diversify its currency holdings away from the USD, General Motors wrote down almost forty billion today without much warning and the financial sector has been taking a huge beating do to the subprime mortgages disaster that happened some time ago (a month or two) but is only hitting the street with real numbers recently. The Royal Bank of Scotland is estimating a finance industry wide loss due to the subprime mortgages of approximately one quarter of a trillion US Dollars. (Which, I suppose, is good that at least the dollar isn’t worth so much. Ha ha.) I record this so that later readers can see the juxtaposition of events more clearly.

Another day of “dollar value” battering leading up to Min and my trip to the UK. Can’t win them all, I guess.